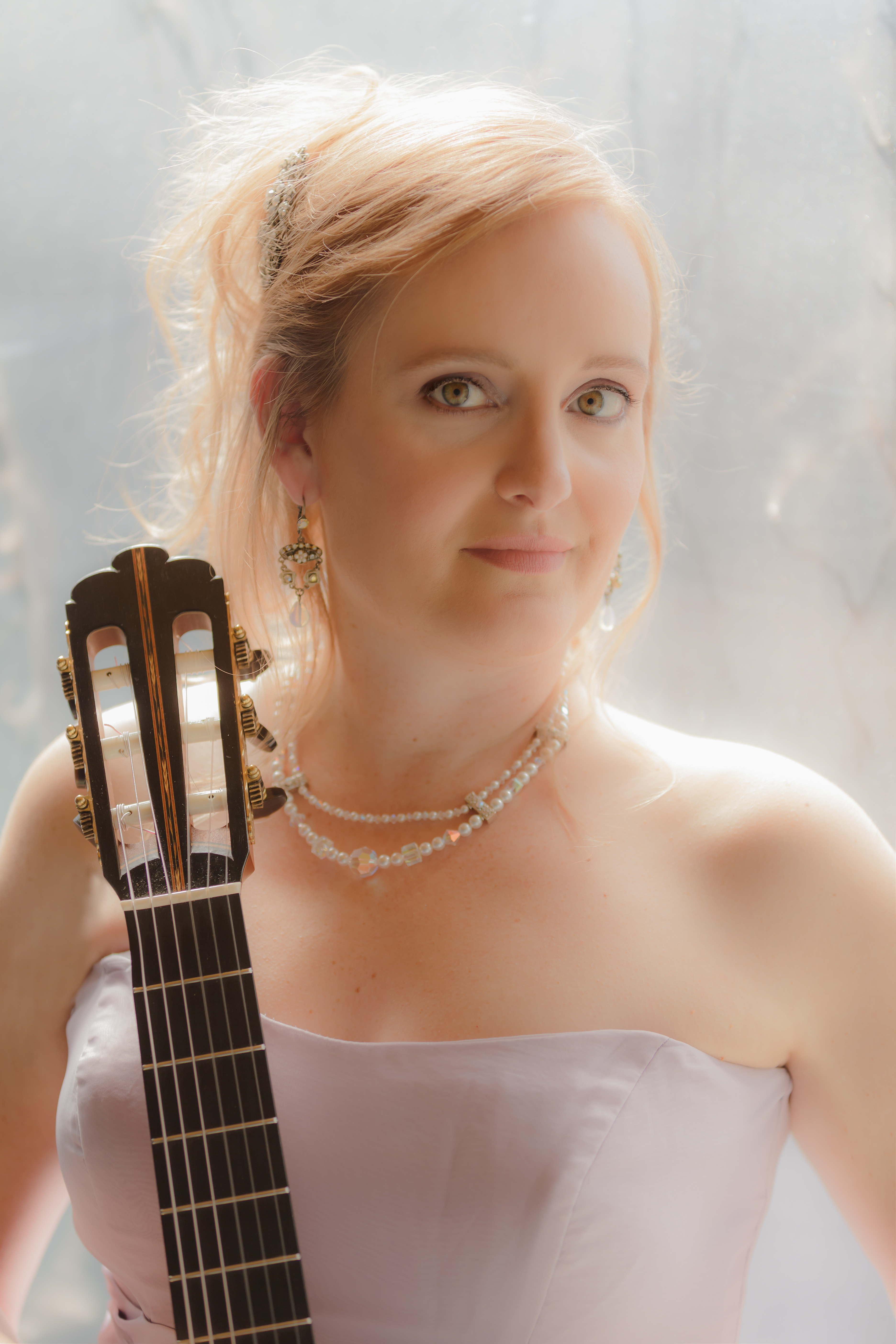 Valérie Hartzell began her classical guitar studies on a half-size Ramirez at the age of three. At the age of six, she studied with maestro Alexandre Lagoya at the Académie Internationale d’Eté in Nice, France.

She has performed in Europe, Canada, the U.S. and has appeared on television in Nice, FR and Houston, TX. She has also been featured on National Public Radio in Texas and Alaska, the show “Women in Music” which is broadcast on CKWR, 98.5 FM Canada, American syndicated radio show, Classical Guitar Alive!, and on BBC Radio 3 on the show, In Tune. She has been featured in several guitar magazines and newspapers including The Times & Citizen (UK), The Bedfordshire Oracle (UK), Anchorage Daily News (USA), South Warrington News (UK), Warrington Guardian (UK), Ashbourne News Telegraph (UK), Soundboard Magazine (USA), Nice-Matin (FR), Classical Guitar Magazine (UK), Dronfield Eye (UK) and Gendai Magazine (Japan).

She has performed in over 30 festivals, including the Middle Tennessee State University Festival, the East Carolina University Competition and Festival in Greenville, NC, the ChamberArt Music Festival in Madrid, Spain, the Pennsylvania Academy of Music Festival sharing the stage with Eliot Fisk, Guitaromania in Agen, France, the Annual Classical Guitar Fall Festival in Oneonta, NY, the Menil Community Arts Festival at the Rothko Chapel in Houston, Texas, was the first and only classical musician selected to perform on the BBC Introducing Stage at the 2017 Latitude Festival, and most recently performed for the Taipei American School Arts Festival in Taiwan.

In England she has performed in prestigious venues such as Warrington Parish Church of St. Elphin in Warrington, St Mary Magdalen in Geddington, the Holywell Room at Oxford University, Clare Hall at Cambridge University, and the 1901 Arts Club in London.

In Texas, Valérie has also performed with studio members of the Houston Grand Opera at the Rienzi Recital Series, Fantasia para un gentilhombre by Joaquin Rodrigo with the Kingwood Pops Orchestra, and Carols of the Southwest by Conrad Susa with the Houston Chamber Choir.

Additionally, she is an international prizewinner in 8 international competitions including 1st prizes at the 10th International Guitar Competition “Simone Salmaso” in Italy and at the Concours de Guitare Classique Heitor Villa-Lobos in France.
At the Peabody Conservatory, Valérie studied with Manuel Barrueco earning her Bachelor of Music in 1997. She was awarded a Graduate Teaching Fellowship at Radford University and was placed as Adjunct Faculty while studying for her Master Degree in Arts, receiving it in May of 1999.

Her CD, Ex Tenebris Lux, recorded at the National Public Radio studios in Houston, was released through Soundset Recordings. Her second CD ‘Presti,’ an ensemble project, was also recorded at the NPR studios.

Currently, Valérie lives in Somerset, England where she teaches classical guitar and piano at Leweston School, composes and maintains an active concert career both as a soloist and as a chamber musician. She is the Artistic Director to the “Classical Minds” Guitar Festival held in England.

Barbara Christian, President of the Performing Arts Society in Kenai, Alaska:
“A mesmerizing evening of virtuoso classical guitar: Valérie Hartzell is one with the guitar and the world classics she translates to her rapt audience; there is no barrier between the exquisitely rendered music and the listener.”